The 110 gram Wham-O pro model disc is the official disc for DDC.

Double Disc Court is played by two teams of two players each and two discs. The 110 gram Wham-O pro model disc is the official disc for DDC, but similar discs can also be used. The drawing on the right shows the field of play.

The aim of the game

There are two courts; each defended by one of the teams. Two discs are simultaneously thrown back and forth by the teams. There are several ways to score a point or points:

The throw off (The Service)

Each team stands in its own court and holds a disc. One of the non-throwing players gives the start signal (Ready? Two, one, THROW!) and each team throws its disc simultaneously into play. The play- ers must throw at the word “THROW”.

The Course of the Game

Throwing back and forth continues until either a disc touches out of bounds, a disc stops in the court, or a double is scored (see above). The team that scored the last point gives the call for the next service. The players of a team alternate the service for each exchange.

Players may catch a disc with one or two hands. It is not al- lowed to catch or interfere with a throw from your fellow- player; so you can’t throw to your fellow-player. It is however allowed to tip a disc before catching. In this case, the player may strike an arriving disc upward and then catch it. This technique can be used for avoiding "a double" when two discs are approaching a court at the same time. The first disc is tipped two or three meters up. While the disc is still in the air, the team-mate catches the disc and throws it immediately. The the other disc can be played safely. It is also al- lowed to catch a tip from your fellow-player.

Throws must be made from within the player's own court. The lines are not part of the court. When a player stands outside the court while throwing, the other team scores a point.

The situation where both teams hold a disc and don’t throw, is called an impasse. The team that scored the last point has initiative and should throw first. The initiating team must throw within four seconds.

A point is scored by the throwing team when a disc touches the ground within the court of the other team and stays within the court.
A point is scored against the throwing team when a disc touches the ground outside the court of the other team, or rolls out of the court after touching the ground.
When the players of a team touch both discs simultaneously during play the other team scores two points. This situation is called a double.Note: you can score with both discs simultaneously. For example: a throw of team 1 is out-of-bounds and at the same time a throw from team 2 is in-bounds. Now team 2 scores two points. There is an exception to this rule. You can’t throw a disc after the other disc has touched out-of-bounds or stopped in the court. If you do throw it, you can not score a point for your own team anymore. But an (extra) point against your team will be scored, when that disc is out-of-bounds.The situation when the discs, thrown by different teams, are both in-bounds or both out-of-bounds is called a break. No points are awarded. Play continues with the other two players serving. The team that scored the last point initiates.

The basic strategy of the game is to threaten to double your opponents, by having them catch both discs at the same time. This is typically achieved by throwing the first disc with a high curve and somewhat later throwing the second disc hard and straight. They can escape this situation only with great difficulty.

The first task of successful play is to be able to keep the disc in-bounds. Use high, skip curve flights and aim for the middle of the court. This will prevent the disc from rolling out-of-bounds. Also arrange for one team member to cover the front of the court and the other, the back portion. The back player is also responsible for deciding how the team will try to escape doubling attacks. Good communication between the team members is essential.

Like all flying disc sports Double Disc Court is played without a referee. The players themselves are responsible for the course of the game. This sheet provides the most important rules only. This is enough to get started. Of course, when you want to participate in official competitions, you must be familiar with all rules. Your national association can provide you with these. Or you can download them from the website. Also, the more experienced players at a tournament are often willing to give an explanation when needed. 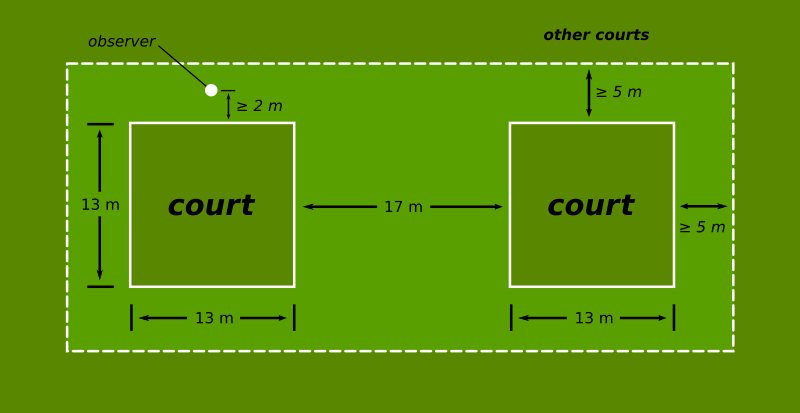